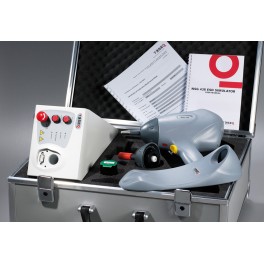 The Teseq NSG 438A is essentially the same as the EM Test ESD NX30 including the charge removing functionality. The ESD NX30 was released in late 2016, utilizing the same components as the Teseq NSG 438, including the HV module, relay, mother board and interchangeable RC networks. The interfaces were updated to reflect the EM Test brand but the menu is the same. Startup calibration is automated on the EM Test ESD NX30 where as the NSG 438 requires a button press to engage.

The Teseq NSG 438A ESD simulator enhances the flagship NSG 438 ESD simulator, with a built-in charge remover ideal for ESD testing of ungrounded EUT. The charge remover will fully discharge the EUT bringing it to the same reproducible state of discharge each time while reducing the time between tests.

Operators can specify opening and closing times between 0.1s and 99s according to their specific requirements. All parameters can be set using the NSG 438A’s convenient, easy to read touch panel

27 other products in the same category: